IDENTITY, ABILITY, AND THE SCIENCE OF THE CHRIST

MAGAZINES AND NEWSPAPERS in the United States have recently given extensive coverage to the so-called gender gap in scientific studies between men and women. The discussion has been fueled, in part, by Harvard University president Lawrence Summers, who earlier this year made remarks that many people initially took to mean that women aren't born with the same intelligence as men when it comes to success in the sciences. But as Summers later explained, ''The human potential to excel in science is not somehow the province of one gender or another. It is a capacity shared by girls and boys, by women and men, and we must do all we can to nurture, develop, and recognize it.''

Raising thought up a level regarding science, gender, and innate ability, one might remember Mary Baker Eddy, who discovered the Science of Christianty. This 19th-century woman, who led the way in revealing a Science beyond the natural sciences, had this to say regarding a more spiritual view of education and science. She boldly prophesied: ''The education of the future will be instruction, in spiritual Science...'' (Miscellaneous Writings 1883-1896,p.61). 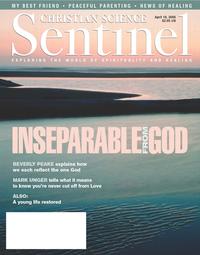