I grew up in the early days of television. My dad was a director for many shows, so our family became familiar with the writing of television scripts.

Consequently, when anyone in the family started to worry or speculate about how an illness or personal problem would be resolved, one of us would say, "Don't write a script." In other words, don't allow the human condition to dictate the story. Instead, prayerfully turn to God, and let Him speak the truth to you. Let God write His script, which is always good.

Jill Grimes is a Christian Science practitioner. She lives in Tucson, Arizona. 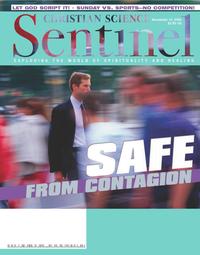