First, the usual sobering factoid: Annual vacations for United States workers are the shortest in the industrialized world—8.1 days after a year on the job (Bureau of Labor Statistics), compared to four to six weeks for Europeans. Even workers in the rising industrial super-colossus China get three weeks off.

Americans work first, rest later, maybe. Some Europeans think they are work-crazy. Some Americans see Europeans as just plain lazy. Neither loony nor slacker himself, author and educator Kirk Jones argues that we need to focus on regaining life's "sacred pace." I agree with Kirk, and he is just as spiritually centered in real life as he looks on our cover, orbited by two of his joyfully spinning children, Joya and Jovonna. 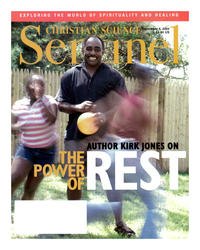