Last month, authors Stephen Prothero (American Jesus: How the Son of God Became a National Icon) and Alan Wolfe (The Transformation of American Religion: How We Actually Live Our Faith) spoke at the second panel discussion in the ongoing series "America the spiritual," hosted by The Mary Baker Eddy Library for the Betterment of Humanity in Boston. Mary Trammell, Editor in Chief of the Christian Science magazines, moderated the evening's presentation. Here are a few excerpts from the discussion:

Send a comment to the editors
NEXT IN THIS ISSUE
CHURCH LIVES
Why didn't I know about this church? 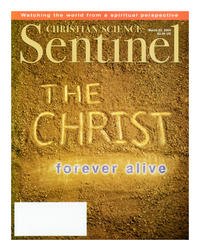