Courtesy of The First Church of Christ, Scientist, and The Mary Baker Eddy Library for the Betterment of Humanity

While this feature is normally reserved for previously unpublished materials relating to Mary Baker Eddy, this week we are presenting a statement that has been published. In the summer of 1900, at the height of the bloody Boxer Rebellion in China, Mary Baker Eddy was contacted by Frederick Grant, Editor in Chief of The Associated News, a news organization that was probably similar to the Associated Press of today. He had heard that the Church of Christ, Scientist, was "endeavoring by the concentration of the will force of its membership, to influence the course of events in China." He asked: "Can you not furnish us with a signed statement on this subject, to be published in the principal newspapers of America? It seems to us that as there are many who misunderstand the purposes and beliefs of the Christian Scientists, such an article could be made to reach and teach thousands the truth, as you see it, and that it would be to the interest of your church to give wide publicity to such a statement.” 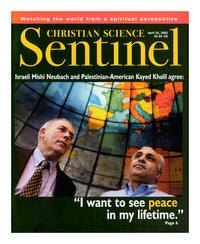