LAST MONTH'S LOCKOUT at ports on the West Coast of the United States has had a rather sobering impact on people in California, where I live. This is especially true for those who are integrally involved, such as a friend of mine who is an importer of perishables from Asia. His cargo has been sitting in a ship off the coast, and he's been wondering whether he'll lose a significant investment, which in the current economy might just mean the end of his business. A loss at this time might even compromise his ability to send his daughter to college.

Since the 80-day cooling-off period that President Bush mandated has gone into effect, most people probably don't feel they're directly affected by the labor lockout. Yet, with the many problems associated with it, such as delays in the unloading of cargo and shipyards jammed with trucks trying to pick up shipments—as well as strikes going on elsewhere in the US and around the world—it's beginning to dawn on people everywhere just how much we are all interconnected in our economy.

Ron Ballard is a Christian Science practitioner and teacher. He divides his time between San Francisco, California, and Ashland, Oregon.

Send a comment to the editors
NEXT IN THIS ISSUE
Article
Prayer: an investment security 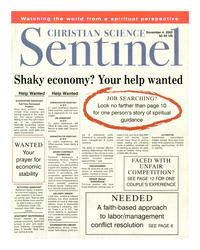