It was a typical trip to the bank. I was at the ATM (automatic teller machine) making a deposit, with a multitude of thoughts running through my mind. I was just about finished when it occurred to me that I had something else to do there. At first I rejected this idea, knowing that I had accomplished what I had intended to do. But the thought persisted. Then it occurred to me to check another account I have. I looked in my purse and found a check that I thought I had deposited in this account several days earlier. The deposit was needed to cover a withdrawal scheduled for the following day. By making the deposit, I spared myself considerable inconvenience.

As I left the bank, I thought about what had happened. The impulse that told me to check the other account was so different from the other thoughts I'd been thinking. Everything else going through my mind was rather vague and pointless, with one thought blending into the next. But this one stood out from all the rest, almost like a spot of color on a black-and-white picture. It was clear and precise, and I felt compelled to pay attention to it. That's not surprising. Guidance like this, which results from God's government of His creation, is naturally compelling.

Send a comment to the editors
NEXT IN THIS ISSUE
Article
"Happy practicing!" 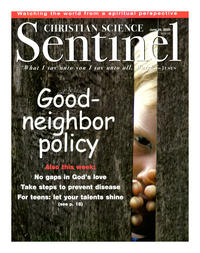