Thanks, to some unhonored women

For the unsung heroines who contribute to society's progress Spiritward

Women have had quite a twentieth century, according to the Ladies' Home Journal. Last year that magazine listed the one hundred most notable women of the century, and the list included amazing individuals, such as Helen Keller, Amelia Earhart, Rosa Parks, and Anne Frank (see Special issue, May 1999). The list also included notable women politicians, artists, journalists, and scientists. As a man looking on from the sidelines, I can only express gratitude for these contributors to humanity's social, political, and moral health.

The list didn't include spiritual thinker, reformer, and Christian healer Mary Baker Eddy, however, and that got me thinking. Not only, why the omission of a woman who, early in the twentieth century, launched a Pulitzer Prize-winning newspaper (The Christian Science Monitor) at the age of almost ninety? But also, what about the hundreds and thousands of other active witnesses to spirituality who have graced this century with their prayers, their hard work, and their healing love? 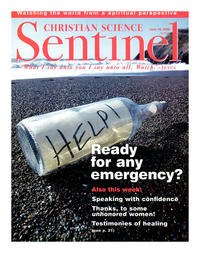