DURING THE PAST year, the Sentinel marked its one hundredth anniversary. This week we look forward to a new year, the beginning of our second century of publishing. 1998 was a significant milestone for our editorial staff.

Yet for most people, the date that's capturing so much attention is the new millennium just around the corner. Actually, the next millennium officially begins on January 1, 2001. But the big date in popular thought is marked when the calendar turns from 1999 to 2000. 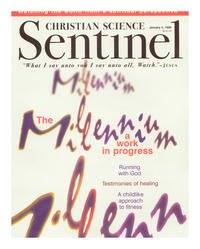