Some healings stand apart because they provide such an important...

Some healings stand apart because they provide such an important foundation for other healings. One of these occurred when I was a senior in high school. I was playing volleyball in a physical education class when another girl fell on me as we were both going for the ball. My ankle made a cracking sound, and I was unable to stand on that foot. After my mother took me home, I called a Christian Science practitioner for treatment. The practitioner recommended that I study several passages in Science and Health with Key to the Scriptures by Mary Baker Eddy, but I was so uncomfortable that I didn't think I could focus on them. Instead, I played a tape of hymns from the Christian Science Hymnal. (In the back of my mind was the thought that since I had often been healed after falling asleep to this tape, I would do the same now, and then I wouldn't have to make the effort to pray while I was in pain.) I did fall asleep, but I woke in a great deal more pain. Clearly, I needed to do more than just passively wait to be healed. I needed to pray for myself. My family was due to leave on a vacation, and I was afraid that I would miss all the fun if I weren't healed quickly! By now I was feeling pretty desperate: I hurt, I was worried about my vacation, and I thought I needed to have a dramatic healing because so many kids at school knew that I was a Christian Scientist.

I frantically read and reread the passages the practitioner had recommended to me, and I read the Lesson-Sermon (found in the Christian Science Quarterly) a couple of times for good measure. It soon became very obvious to me that what I was doing had nothing to do with inspiration or prayer. The problem was that I didn't think that I was capable of enough inspiration to heal this difficulty.

Send a comment to the editors
NEXT IN THIS ISSUE
Testimony of Healing
One day my husband came home and said, "I think I have... 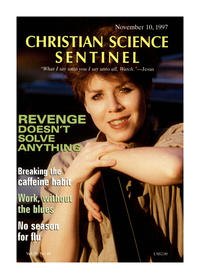