The recently discovered chunks of New Jersey amber contain an amazing treasure. They tell a story. Frozen in time within each translucent piece is a record of biological life that is very old indeed. Among the discoveries revealed in minute detail are the ancient bloom of the earth's most primitive oak, the delicate wings of a wasp, and the earliest-known evidence of a terrestrial bird that walked in North America at least ninety million years ago. See David A. Grimaldi, "Captured in Amber," Scientific American, April 1996, pp. 84–91 .

Trying to think in terms like that—all those millions of years captured in a piece of amber—isn't easy. Mankind's written history goes back perhaps a few thousand years. People's personal stories review mostly the decades of this past century. (Recently I met a woman who has been working two days a week at an inner-city church in Boston. They honored her one-hundredth birthday a few months ago.) But a bird that preened its feathers in New Jersey ninety million years ago? The human mind may take in the numerical symbol easily enough; after all, it's only a number. But the huge span of time it represents can feel beyond us somehow.

Send a comment to the editors
NEXT IN THIS ISSUE
Editorial
In the midnight hour—a wedding! 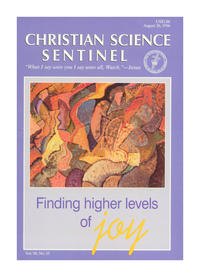