In early 1991 I became ill with some type of cold or flu. I prayed a great deal about this illness in particular, and about my professional life in general, since I had been feeling dissatisfied with some parts of my work as a college professor. I also had the help of a Christian Science practitioner. However, the problem continued to worsen until I found I could not perform well in my teaching.

By March I reached the point where I felt I should request a leave of absence from teaching and from the other responsibilities at the university. To qualify for the leave, I was required to have a medical examination. The doctor was very concerned and said I had a severe case of bronchitis, which was fast developing into emphysema. He considered my condition serious.

Send a comment to the editors
NEXT IN THIS ISSUE
Testimony of Healing
For some time I have had a desire to write a testimony for our... 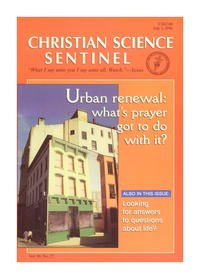