As a young adult, I was apt to lose my temper rather frequently when I felt my indignation was righteous because I was championing a good cause. But as I thought and prayed more about it I discovered that in reality there is no such thing as righteous indignation, because indignation is actually a degree of hatred. It began to dawn on me that instead of being righteous, my attitude might be self-righteous. In dismay, I began to work at overcoming what had become by then a habit of reacting.

One day during that time, I was reading the Bible story of Joseph (see Gen., chaps. 37, 39–50). I saw that his life for many years was one difficult experience after another: He was sold into slavery by his jealous brothers and taken into Egypt; later he was falsely accused and thrown into prison. But Joseph persisted in his love for God and obedience to Him. Through this closeness to God, he was enabled to interpret dreams, and Joseph was taken out of prison so that he could interpret the Pharaoh's dream. As a result of the wisdom he showed, Joseph was chosen by Pharaoh to administer the stockpiling of grain during seven years of bountiful harvest. This provision prevented starvation during the seven years of drought that followed. After his brothers had come from Canaan a second time to buy grain during the drought, he revealed to them who he was. He told them not to condemn themselves for what they had done to him, "for God did send me before you to preserve life" (45:5).

Send a comment to the editors
NEXT IN THIS ISSUE
Poem
Wake up! Wake up! 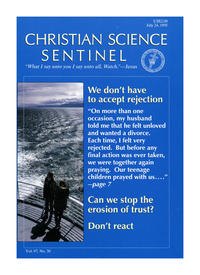