The two-lane highway to Boma in western Zaire was in better shape than the long stretch from Kinshasa to Matadi we had driven the day before. A late start, though, brought dusk not long after we descended from higher elevations to the coastal plain.

The trip had been going well, but I felt the need to pray the whole way. Fatigue and fear tried to crowd into thought. By the time the road took us into an area of dense jungle it was dark, and I remembered a friend's warning to avoid driving at night in rural Africa.

Send a comment to the editors
NEXT IN THIS ISSUE
Article
What does spiritualism have to do with me? 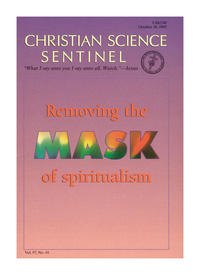