Talented? Yes, you are!

Chas was having a rotten day. And it should have been a great one. He was at Scout camp. He was on the lake in a canoe, all by himself. While that should have been the good part, actually it was the bad part. He was supposed to be paddling straight across the lake by himself. But all he could make the canoe do was go around in circles. What's worse, some of the other Scouts could see him—even some Girl Scouts! But then Chas remembered that he could pray.

There's a talent story in the Bible that Christ Jesus once told. It's in Matthew's Gospel (25:14–30). Maybe you know it. Jesus said the kingdom of heaven was like a man who was taking a long journey and gave his servants his belongings to take care of while he was gone. Now, the talent the Bible is referring to is an amount of money. But the story makes clear that the differences between the servants weren't just in the amount of money they were supposed to look after, but were in their ability to do a good job with what they had. Two of the servants used the talents well, and when the lord returned he gave them more. One got scared and didn't use what he'd been given. That servant had his talent taken away. The message is plain: When you use your talents and abilities rightly, don't be surprised to see them increase.

Send a comment to the editors
NEXT IN THIS ISSUE
Article
Science and Health—a book for studying, for healing, for sharing 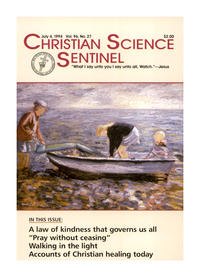