The only lie is mesmerism

One night around dusk, while my wife and I were out driving through the countryside watching wildlife, we pulled off the road and nestled our truck into an area canopied by several tall trees. We sat for a few minutes, observing deer, foxes, and other animals as they strolled through the open fields before us. Soon my wife looked out her side of the truck and noticed a wild turkey standing completely still, only ten feet from our truck. We were careful not to alarm it; we felt honored to be so close. We both became entranced by as it stood there without even blinking an eye.

After a moment, however, we couldn't help wondering how it had walked up without our seeing it, or if it had already been there when we arrived, why it hadn't run away. I knew something wasn't right and began to worry. I wondered if it was sick or wounded. Try as I might, I just couldn't make any sense of the picture. But after one more really thorough look at it, I relaxed and sat back in my seat in laughter. My wife soon joined in as we both noticed that where the turkey's feet should be, there was a single rod going from it into the ground. It was a turkey decoy used in trapping and relocating wild turkeys! In the low light, it had appeared so real to us that we never even thought to doubt its authenticity. Why should we? Our senses told us everything we needed to know to confirm its reality. Or did they?

Send a comment to the editors
NEXT IN THIS ISSUE
Article
"Where's your church?" 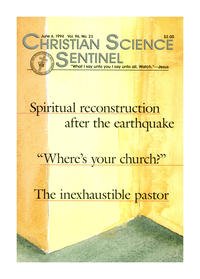