The peace of God is yours

Even if we are persecuted and mistreated, the peace of God is at hand, to be felt and demonstrated.

Has the peace of God ever seemed out of reach to you? Do you feel you live in a world that seems far from God? Sometimes I've felt that way. But during a long period of conflict and unhappiness I learned that the peace of God can never really be taken from us.

I was on a new job that was going very well. But after a few months my boss began to ignore me. He made a practice of avoidance. Then he began a series of deliberate attempts to humiliate me before others with what I felt were willful and unwarranted verbal attacks. This became a pattern of outright harassment, which at times seemed unbearable. I knew that my work and my relations with others were good, so the reason for this man's hostility was a mystery to me. Each day I turned to God in quiet prayer and, as I had learned in Christian Science, sought a better understanding of the man God has created as His own likeness. 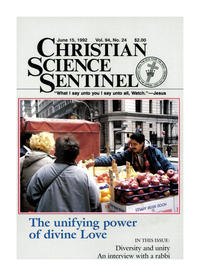