A recent theater production in London had a cast that represented seven countries. The play—When she danced—is based on the life story of the American dancer Isadora Duncan, who was married to a Russian. The action takes place in Paris, and several of the characters in the play can speak only their own language, so they can't understand what those of the other six countries are saying. Misunderstanding and frustration mount until in the play an interpreter appears on the scene. But even she has a hard time actually explaining the real meaning of each exchange to the others!

A translator is certainly useful when people from different nations just cannot understand each other's languages. Even when they can, however, there are still those times when it is hard to render accurately the true meaning of certain words. We do not have to look farther than the discussions that take place in the United Nations General Assembly or the Mideast Peace negotiations, to bring to mind the difficulty. 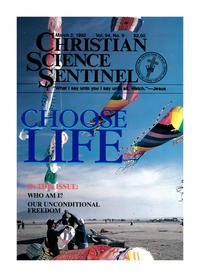