Pollsters and trend-watchers may not have confirmed it yet. But there does appear to be a steady move toward trying to resolve conflicts by something other than more conflict. And those involved in peacemaking are making more mention of prayer and spiritual love as important in their work.

Appearing on The Daily Edition of Monitor Radio, South African clergyman Rev. Beyers Naudé described how he has seen reconciliation and healing come through prayer. He had been shunned by his congregation and banned by the government for his preaching against apartheid. An excerpt from his interview appears in our "Second Thought" section. 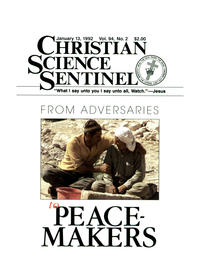