One day early in a week in 1987, something developed under one of my arms. At first I was just uncomfortable, but soon I was unable to raise the arm. After a short time I called a Christian Science practitioner for help through prayer. We both worked with spiritual truths found in Science and Health by Mrs. Eddy, including this statement: "Christian Science brings to the body the sunlight of Truth, which invigorates and purifies."

Send a comment to the editors
NEXT IN THIS ISSUE
Testimony of Healing
I had no real objections to my mother taking me to a Christian Science... 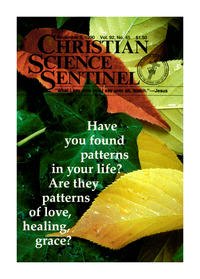