The "problem" with new perceptions

I found an unusual map recently that turned the world upside down. Actually, the copy I saw turned only the Western Hemisphere around, but the point of the mapmaker was well taken. Here was an entirely new way of looking at the relationship of landmasses on our planet—Argentina and Chile are at the top of the map, Canada and Greenland at the bottom. But a few other things, like perceptions, get switched as well. For example, some society's cultural prejudices suddenly come to light by this simple transposition of the way we've always viewed geographical features.

In his book Information Anxiety Richard Wurman has reprinted this "turnabout map," and he points out that it's really only a longstanding tradition that keeps North America at the top of the globe. It isn't a fact of physics or a "scientific" necessity. Turn things "end-to-end," he says, and you discover the shortcomings of this cultural bias. As Wurman writes, "'On top,' 'over,' and 'above' are subtly equated with superiority; 'down,' 'beneath,' and 'below' imply the reverse." Then he suggests, "Flipping the image like this could perhaps turn those largely subconscious judgements around as well." Richard Saul Wurman, Information Anxiety (New York: Doubleday, 1989), p. 66 .

Send a comment to the editors
NEXT IN THIS ISSUE
Editorial
What's really to be won? 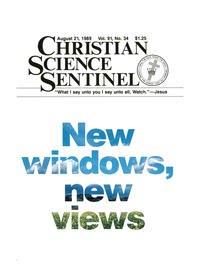