At one time I was looking for a new job

At one time I was looking for a new job. It seemed hopeless; all I received was rejections. When I started to understand that the important thing was not to practice my profession but to perceive my real calling—to express God's goodness in every area of my life—I was led to answer a want ad that had already appeared about ten days previously. I was given the job, even though more than eighty applications for that position had already been received.

The First Church of Christ, Scientist, and Miscellany by Mrs. Eddy states (p. 165): "As an active portion of one stupendous whole, goodness identifies man with universal good. Thus may each member of this church rise above the oft-repeated inquiry, What am I? to the scientific response: I am able to impart truth, health, and happiness, and this is my rock of salvation and my reason for existing."

Send a comment to the editors
NEXT IN THIS ISSUE
Testimony of Healing
Science and Health by Mary Baker Eddy defines the word tithe... 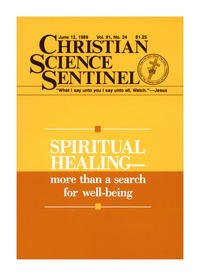