Crimes of sexual violence among teen-agers—how can we respond?

It's the kind of subject that most of us don't like to talk about. We may even want to pretend it doesn't exist. But no one can escape the headlines: a jogger is raped and brutally beaten by a gang of teen-agers; a seventeen-year-old girl with a mental impairment is sexually attacked by a group of boys, some of whom she has known since grammar school. The first of these attacks takes place in New York City; the second, in a fashionable suburban community. One is perpetrated by Hispanic and black youth; the other by middle-class whites.

A recent Time magazine report Time, June 5, 1989 . concludes that this kind of "sexual violence by adolescents transcends racial and class lines." Then Time warns, "Such attacks are now increasingly common across the U.S. According to the FBI, the number of arrests for rape committed by boys 18 years old or younger rose by 14.6% between 1983 and 1987." 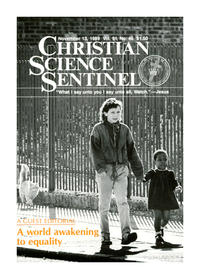