Spiritual preparation for an exam

A comprehensive teachers' examination may not seem much of a time for rejoicing. But an exploration of the real source of intelligence puts exams in a wholly new light.

When I got out of college I found that in order to teach in the area I had just moved to I had to take a state test. It was rumored that 60 percent of those taking the test would fail on their first try. There were many who were resentful and angry about this requirement; many were afraid of the test and questioned its validity to measure teaching ability.

In the past I would have classified myself in the 60 percent who were supposed to fail. When I was in high school I never did well on tests. In college I made some improvement but not without struggle. This time, however, I learned more than just the material on the exam. Along with studying mathematics and English, the subjects on the test, I studied the Bible and the Christian Science textbook, Science and Health by Mrs. Eddy, to gain a clearer understanding of God and my relationship to Him. I have found that a study of the Bible in the light of what Christian Science teaches brings preconceived and limiting notions of God and man in for a complete overhaul. We find that God isn't a punishing, vengeful God, as He's so often pictured, or a far-off, uncaring God, either. He's tender, loving, always present with us. 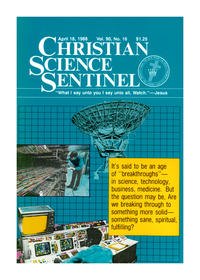