My half of the ark

Outside , the rain drummed mercilessly on the skylight at the top of our stairway. I was on my way downstairs to collect my briefcase and coat when my husband called out, "Have you built your half of the ark?" He was, of course, referring to the miserable weather; but on my way downtown I thought seriously about a deeper dimension of his question and the answer that God requires of us.

I spent my half-hour commute that day thinking about the concept of an ark, and pondering how it could be applied to protecting the marriage covenant between two people. Only a few nights earlier my husband and I had discussed, late into the night, the challenges being married can bring. Boredom, attraction to others, disillusionment with married life, are just a few of the negative elements that would challenge a married couple. Of specific concern to my husband and me were the challenges a marriage faces when both partners are pursuing a career outside the home. The temptation to believe that a career, a colleague, or a certain life style is more interesting than one's spouse is being hurled at men and women alike, as mercilessly as the rain was beating upon our roof that morning. 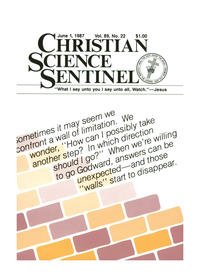