Should I be armed?

Maybe this is a question you've wondered about. Is physical self-defense the only—or best—self-defense?

Are you afraid to walk in a city or the suburbs or even the country, day or night? Many people are. There are those who even feel they need to carry some kind of weapon for self-protection. I had often wondered what I should do and think about these serious concerns. Is it possible to be safe without recourse to such means?

One day I had a sudden opportunity to face this question head-on. I had come into the city on a commuter train. The stations in this city are part of a subway system several flights of stairs below street level. When leaving the train, I was alone. As I went up the first flight of steps, I saw someone approaching from the upper level. When I reached the landing, he rammed into me, then pointed downward and told me my shoe was untied. He wanted me to look down, but I just kept looking directly at him. Although he made it clear that he intended to do me harm, I felt calm. There was no fear. Then, after one final physical threat, he simply sighed and ran on down the stairs. I had no human help or weapon. He left and I proceeded up two more flights of stairs to the street. I was unharmed. And very grateful! 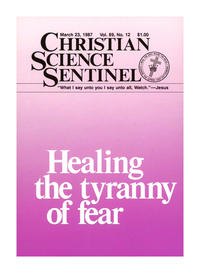