Christian healing— a continuing legacy from our Saviour

He could see! The man had been blind all of his life, but now he could see. And a woman who for eighteen years had been bent over was at once standing straight and free. Another man, confined to bed with a crippling palsy, was released, whole. And a child near death was suddenly well. The fever was gone.

There were many others of course. Wonderful healings, as the Bible says, in the New Testament, of "all manner of sickness and all manner of disease among the people." Matt. 4:23. And there were also the lives raised up from sin, the darkness in the human heart vanishing as the great light of Christ, Truth, filled one's whole being. Two thousand years ago Jesus was walking the roads of Judea, and he was healing as nobody else ever had.

Send a comment to the editors
NEXT IN THIS ISSUE
Article
One of the special characteristics of metaphysical... 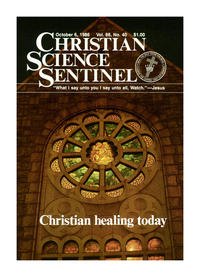