Be grounded, not stranded

Although the snow had stopped, blowing winds off the prairie sent drifts across roads and obstructed vision on runways. Traffic advisories were in full force: no one was leaving town. In the middle of a professional trip, I was stuck in a midwestern snowstorm.

On the way to the airport that afternoon, we had been blocked by a truck trying, without much success, to pull a car out of a deep snowdrift. Time was getting short, and I began to be concerned about reaching the airport in time for my flight. Then I reached out to God for help. "Father, this entire journey has been so harmonious. I have continually been just where I needed to be at precisely the right time. All my needs have been met. My motives have been good, and I know that nothing can stop this forward progress." My thought calmed. I knew that wherever I was that evening, I would be where I belonged. As I looked up, I saw the car was freed from the drift, the obstruction cleared, and soon traffic began to move. When we reached the airport, however, we were told no planes could land or take off until the winds abated. I was, it appeared, stranded in that city after all. 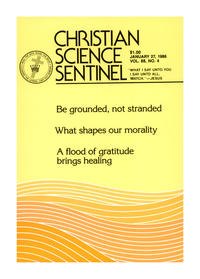