In a paragraph with the marginal heading...

In a paragraph with the marginal heading "Scientific obstetrics," Mary Baker Eddy writes in the Christian Science textbook, Science and Health with Key to the Scriptures (p. 463): "Teacher and student should also be familiar with the obstetrics taught by this Science. To attend properly the birth of the new child, or divine idea, you should so detach mortal thought from its material conceptions, that the birth will be natural and safe."

When I was five months pregnant with our fourth child, the physician on the case diagnosed a condition called placenta previa. He said that at best this would necessitate a Caesarean delivery. At worst, in his opinion, it might involve prenatal hemorrhaging (commonly associated with this condition) before the baby was mature. He said that if hemorrhaging occurred, immediate surgery would be called for and the baby's survival would be unlikely. I was grateful that the physician, a kind and thoughtful man, was prepared to leave to me the decision of whether or not to enter hospital straightaway.

Send a comment to the editors
NEXT IN THIS ISSUE
Testimony of Healing
While I was a salesman for a large electronics firm, I found... 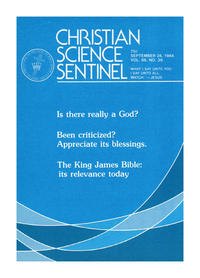