World peace is an issue affecting each of us in all corners of the earth. What happens on a tiny island in the Caribbean can be of as much interest to the Asian as it is to the North American. When superpowers move their forces freely around the globe, when sophisticated arms are sold to countries unprepared to safeguard their use, when national or tribal anger boils over, the world catches its breath.

With so much naked aggression and not-so-latent hostilities on the international scene, it is tempting for the good citizen to become mentally embroiled. National pride, self-righteousness, anger, racial and religious prejudice, mental rigidity, and hatred can draw us into warlike attitudes if these remain unhealed. It then seems natural to lob hate-filled thoughts toward a perceived enemy, and to stockpile arsenals of fear and wrath. What can you and I do to keep these destructive forces from detonating? 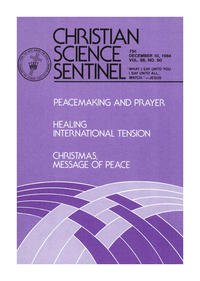