The healing of Naaman

Long, long ago (almost nine hundred years before Christ Jesus was born) there was a man called Naaman. He was very important—the head of the army of the king of Syria—and he had won many battles. But he was sick; he had leprosy, and no one knew how to cure it.

In one of their raids into the land of Israel, the Syrians had taken prisoners. Among them was a little girl who became a personal maid of Naaman's wife. Although the little girl had been taken from her home, she must have really wanted to help in this new place. One day she said to her mistress: "If only my master were in Israel! A prophet is there who would heal him." Of course everyone was interested when they heard this, and someone told the king.

Send a comment to the editors
NEXT IN THIS ISSUE
Testimony of Healing
"I shall not die, but live, and declare the works... 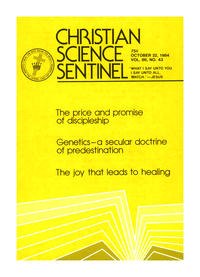