One day many years ago I was doing the laundry, using a...

One day many years ago I was doing the laundry, using a wringer-type washing machine. My small son was with me, and as I stepped for a moment into the next room, he climbed onto a chair and put his hand in the wringer. The machine was on; it pulled his arm through to the shoulder. On hearing him cry out, I ran into the room and released his arm by disconnecting the machine. He was very frightened, so I took him in my arms and comforted him. Then we went into the living room, and I sat down with him, and read aloud from our textbook, Science and Health by Mrs. Eddy. After a short time he became quiet and went to sleep. When he woke hours later, there was no indication of injury, except for a very small bruise that was barely visible and soon disappeared. He was happy and free.

At this time we lived several miles from a Christian Science practitioner and had no telephone. There were no other Christian Scientists in the area. However, the realization of God's nearness and confidence in the healing truth revealed in Science and Health gave me the assurance that God was caring for us then and always, no matter where we were.

Send a comment to the editors
NEXT IN THIS ISSUE
Testimony of Healing
At an early age I began attending classes in a Christian Science Sunday School,... 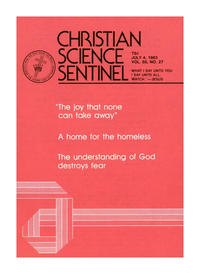