In Alex's family if anyone got a lot of praise for something, he or she would "pass the compliment upstairs." This was the family's way of saying that the praise really had to go to God, or the Most High, as the Bible says, because He is the only source of good. It was right in line with Jesus, who said that he of himself couldn't do the marvelous works, because "the Son can do nothing of himself, but what he seeth the Father do: for what things soever he doeth, these also doeth the Son likewise." John 5: 19.

Now, Alex liked to play baseball. He played with his friends after school, and he joined Little League baseball in his neighborhood. Even the practice games were fun, and Alex hoped his team would always win.

Send a comment to the editors
NEXT IN THIS ISSUE
Testimony of Healing
One day about four years ago I noticed what... 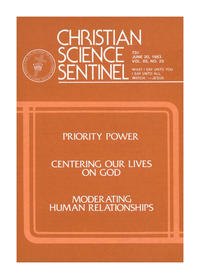