The myth of mortality

Years ago I was present when a woman was placed under hypnosis. As if she were a robot, she obeyed everything impressed on her thought by the commanding voice. She cried and laughed, apparently feeling the sentiments of hate, fear, and joy as they were suggested to her. She was obviously not conscious of those around her.

I thought about this many times later. Through Christian Science we learn about the influence the material world and its superficial view of existence seem to impose on us. The media, institutional education, and speculative theories belonging to ancient philosophies and doctrines claim to hold sway. But our nature as the pure child of God forbids the compelling urge to be or do something contrary to our spiritual heritage. Any hypnotic influence is error, based on physical beliefs. In Miscellaneous Writings Mrs. Eddy tells us: "Christian Science classifies thought thus: Right thoughts are reality and power; wrong thoughts are unreality and powerless, possessing the nature of dreams." Mis., p. 252.

Send a comment to the editors
NEXT IN THIS ISSUE
Article
Beyond fragile, mortal existence ... 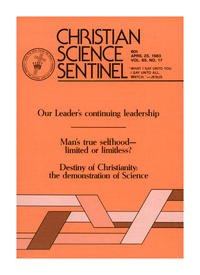