As a child and on into my teens and early manhood, I was confronted...

As a child and on into my teens and early manhood, I was confronted with heartburn or indigestion. I would take a teaspoon of bicarbonate of soda in a glass of water for relief. When I became interested in Christian Science, I began to pray for healing, but the physical condition did not respond. After I asked for prayerful help from a Christian Science practitioner, I had a complete and permanent healing in about a week. This was over forty years ago.

After serving as manager of one of our company's offices for nineteen years, I received a much-desired promotion to become the district manager of one of our major offices. Even though this was a fine advancement, I became very depressed. On the train during one of these depressed periods I took out my pen and started to write all the things I was grateful for. Knowing that gratitude was prayer, I must have continued to write for more than two hours, with a lot of prayerful thought between each notation of gratitude. I was filling my consciousness so full of good that there was no room for evil, self-pity, or depression. During this period of two hours or more I had a complete healing—one that has remained permanent.

Send a comment to the editors
NEXT IN THIS ISSUE
Testimony of Healing
While I was growing up, I dearly loved the spiritual truths... 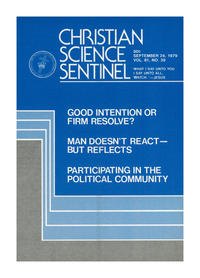