About eleven years ago, following an automobile accident in...

About eleven years ago, following an automobile accident in the Sierra Nevada mountains, I was taken by ambulance to a hospital. As I regained consciousness, I began pondering many truths learned in daily study of the Bible Lesson in the Christian Science Quarterly. My injuries were extensive, including many broken bones. I was put in traction. Later I learned that I had not been expected to live.

Although I permitted the doctor to set the bones, I took no medicine or sedatives, as I had no need for them. Soon after the accident the pain had been overcome through prayer in Christian Science. I had the support of my wife, and treatment from a Christian Science practitioner.

Send a comment to the editors
NEXT IN THIS ISSUE
Testimony of Healing
One summer, while packing the car before heading off to ... 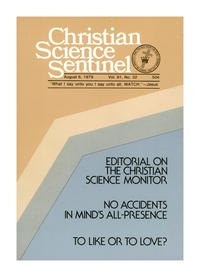