Dominion that transforms the universe

One of the major ideas that has shaped western civilization is the Judeo-Christian concept that man has God-given dominion over the earth. But western man has interpreted too literally the biblical command, "Be fruitful, and multiply, and replenish the earth, and subdue it." Gen. 1:28; For centuries he has viewed the earth as existing solely for mankind's benefit and use and has actively sought to subjugate the planet.

The results of this world view seem mixed. On one side, we see considerable control of nature by science and technology and a higher standard of living for more people than at any time in history. On the other side, we see the ravishing of the land and oceans, destruction of wildlife, and environmental pollution. Because of these problems, many people feel it's time to discard the Judeo-Christian concept of man having privileged dominion over the earth. But what is really needed is a more enlightened vision of man and his role in the universe, one that reveals the true significance of that verse from Genesis. 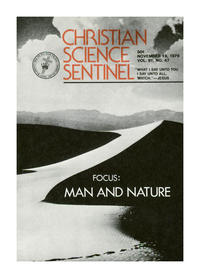