PERSPECTIVE ON THE NEWS November 5, 1979 ISSUE

The fiftieth anniversary of the American stock market crash of 1929 is being given much attention by the media. That event ushered in the Great Depression of the 1930's. Today, people are asking if it can happen again. They are wondering if the United States is due for another 1930's-type depression—one that might trigger a worldwide economic crisis; and if severe unemployment and deflation are the inevitable outcome of sharp inflation.

Christian Science brings powerful and decisive truths to bear on these concerns. It maintains that evil is not inevitable. God's continuity of good can be demonstrated.

The first statement in the Preface of the Christian Science textbook, Science and Health, acknowledges the omnipotent action of "the sustaining infinite." Mrs. Eddy writes, "To those leaning on the sustaining infinite, to-day is big with blessings." God is the sustainer of His entire creation, including man, and His supply consists of spiritual ideas, which flow continuously from the divine Mind, infinite good.

This understanding of God's infinite, consistently flowing supply can reverse the current fears of deep recession and depression, abnormal cycles of expansion and contraction, inflation and stagnation. While some economists are viewing apprehensively what are called Kondratieff cycles—those that, according to a Soviet economist of the same name, tend to recur in Western economies about every fifty years—Christian Science shows that destructive cycles have their origin in belief only, the human belief that good is variable, subject to disruption. Good is not erratic, coming and going, but constant and continuous.

In the Glossary to Science and Health Mrs. Eddy defines "good" as God Himself. She writes, "God; Spirit; omnipotence; omniscience; omnipresence; omniaction." Science and Health, p. 587; This definition roots out the belief in harmful cycles. Since good is God, our "goods" are the spiritual ideas that flow to us unceasingly from divine Mind. They're ever present, never absent. How could good suffer the vagaries of expansion and contraction when it is the very nature of God constantly to provide perfection for man? Belief in cycles of fluctuating good is a perversion of God's inevitable omniaction. How could there be less of infinite good tomorrow than there is today? More over there than there is over here? God is the sustainer, and He sustains His creation impartially and invariably.

It is crystal clear to the scientific Christian that the mortal concept of destructive cycles can be effectively challenged through prayer. While economics considers good to be essentially material (those goods and services provided for the satisfaction of human wants) the Christian metaphysician acknowledges man as spiritual, tributary to Spirit not matter. He sees man, not as embraced by a materialistic universe outside of God, but as dwelling in God, divine Mind— totally outside matter. This truth annihilates such man-made economic fallacies along with all their consequences.

More and more, thoughtful people in the world are realizing that the answers to modern problems will not be reached through mass manipulation—political or economic. Solutions can only come through individuals turning away from the materialism so pronounced in this age to discover their God-bestowed spiritual resources, which alone satisfy. The Apostle Paul declared, "My God shall supply all your need according to his riches in glory by Christ Jesus." Phil. 4:19.

We find these riches that belong to us by virtue of our sonship with God when we realize that man is tributary only to God, and to His economy of good. It is every bit as important to resist faulty economic "law" as it is to reject erring health "laws." Spirit, God, is man's substance. God's laws govern the ideas He supplies. These ideas are infinite, ever present, ever active, ever available. On this basis we can reject for ourselves any mistaken theories that assume matter to be substance and that open the door to the repetition of evil. And on this basis we can help to nullify for all mankind the falsehood that variations in God's goodness can occur. 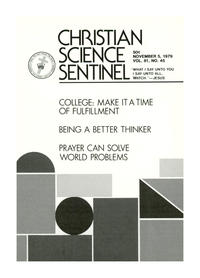