There's a popular saying that genius is 10 percent inspiration and 90 percent perspiration. Adam, who, according to the Bible story, was doomed to spend his life toiling in the soil and whose major talent appeared to be blame-fixing, would no doubt have agreed.

Think of the spiritual genius of Christ Jesus, whose deep, constant, ascending prayers enabled him to heal multitudes! And think of his followers. John was inspired, even in exile on the stony Isle of Patmos, to the point of beholding a new heaven and new earth and painting a panorama of the struggle, and of the victory in human consciousness that comes with the understanding of God, divine Mind, and His idea. And Paul, through his danger-laden ministry and his letters, aroused the people to more firmly and widely establish the early Christian Church.

Send a comment to the editors
NEXT IN THIS ISSUE
Article
"How does your garden grow?" 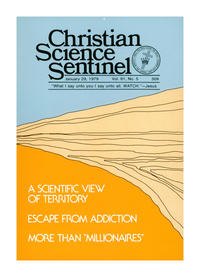