Christian Science came into my life at a time of great need. I lived in a small town where I was known as the walking skeleton. Finally my husband became so alarmed that he took me to an adjoining town to see a doctor. The doctor told me I had an inward goiter. He said I would require an operation, but that he could not undertake it. A specialist would have to be brought in from a city some distance away. I was in despair, for I had two small children; times were hard, and we could not afford the expense.

A newcomer to our town came to me and told me I could be healed by the power of God, understood in Christian Science. I was desperate, and she was most kind, so I started to read with her the Bible Lesson in the Christian Science Quarterly. We met once a week. These visits became a great source of joy to me. My thought turned from despair to hope, and in a few months I was perfectly well. I was on the mountaintop of joy!

Send a comment to the editors
NEXT IN THIS ISSUE
Testimony of Healing
How grateful I am to the individual who many years ago introduced... 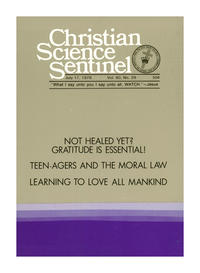