If you were to become covered with dust, you wouldn't claim it as "my dust." You would simply remove it, knowing it did not belong to you. Neither would you ponder why you had such an experience or think about how difficult it was to remove the dust. You would just dismiss the matter.

When we are confronted with an inharmonious situation, don't we frequently identify it as ours—our sickness, our suffering, our problem? We might also casually wonder what caused it, why we should be burdened by it, and what we should do about it. By claiming the trouble as belonging to us, we are giving it identity and reality. Mrs. Eddy says, "It is mental quackery to make disease a reality—to hold it as something seen and felt—and then to attempt its cure through Mind." Science and Health, p. 395;

Send a comment to the editors
NEXT IN THIS ISSUE
Article
Would you argue with a liar? 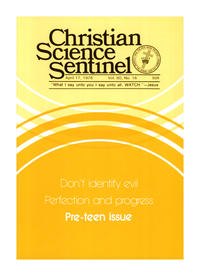