I once watched typical Christian Science healing evolve right under my feet. I was part of a mountain-climbing party doing some climbing on a sheer rock face of several hundred vertical feet. At three different places on the face of the rock we had to regroup. Then a single climber led the next "pitch," trailing a rope behind him that would be used to stop him in the case of a fall, and that he would use to help protect the climbers following him.

Finally the leader climbed the last pitch and reached the summit, where he quickly readied himself to help the climber who was to follow him. I was that climber. 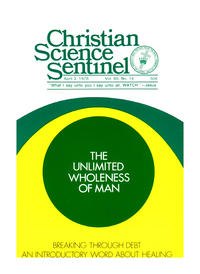