Christian Science has brought me many blessings over the...

Christian Science has brought me many blessings over the years. At an early age I attended the Christian Science Sunday School and there learned something of the truths of God and man's relationship to Him, and for this I am deeply grateful. As I grew to late teens I found it difficult to understand the Christian Science teaching of the unreality of matter, and I started to read philosophical and other religious books along with Science and Health by Mrs. Eddy. This book was, in fact, a measuring rod to all I read.

As time went on, marriage, the births of three daughters, and the Second World War brought problems that could not be solved by philosophical reasoning, and I turned with renewed earnestness to the deep study of Christian Science. It was during the war that I had a healing that enabled me to see the connection between thought and effect, and to catch a glimpse of the unreality of matter. 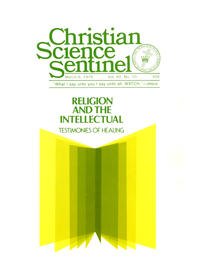