I recently had a beautiful healing that came very quickly and...

I recently had a beautiful healing that came very quickly and proved to me, beyond doubt, the healing power of God.

For about six months I had a growth on my face, near my ear. It didn't hurt, so for a while I paid no attention to it. As time went on it began to grow and became quite ugly. When it bothered me, I decided to pray about it, but the effort was spasmodic. Finally a well-meaning friend expressed real concern, and fear of something more than a cosmetic blemish engulfed me. I realized discord or disease was no part of God's creation; it was the belief in evil that needed erasing. I asked a Christian Science practitioner for treatment. The first thing he said showed that growth in spiritual understanding is unfoldment from within, not accretion from without. I knew that the problem would be resolved, and the fear left me. 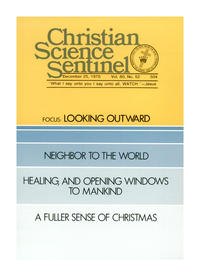