"Blessed are they which do hunger and thirst after righteousness:...

"Blessed are they which do hunger and thirst after righteousness: for they shall be filled" (Matt. 5:6). This beatitude and many other truths spoken by Christ Jesus took on new meaning when I began the study of Christian Science twenty-seven years ago. I have indeed been filled, not only with gratitude but with peace and happiness as well.

By the time I was twenty-two, I felt life on this earth had nothing to offer. Ideals once thought inherent had long been dashed to the ground. From early childhood, existence had seemed bleak and dreary. Our family was large and very poor in material things. Depression and lack were an accepted way of life for all of us. I attended a denominational Sunday School in my early years; but rather than a closeness to God, I felt only remoteness. I married very young, hoping to escape the gloom, but sank even deeper into despair, and the marriage ended. Due to much family distress and discord, I felt my only choice was to leave my two children with my mother-in-law in order for them to have a home. 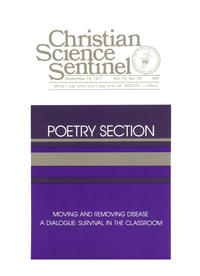