I have not always been a student of Christian Science, but turned...

I have not always been a student of Christian Science, but turned to it over twenty years ago after becoming dissatisfied with my own religion. I saw what Christian Science was doing for my wife. At that time I started going to a branch church with her and also began to study Science and Health with Key to the Scriptures by Mary Baker Eddy. I had been doctoring for stomach trouble, using about a bottle of medicine a week. I stopped both doctoring and the medicine, and the physical condition was healed. I have not taken any medicine since. Over the years there have been various physical healings, and financial and employment needs have been met.

I became greatly dissatisfied with my work and living conditions in another state. One day I answered an advertisement in The Christian Science Monitor for a position at a private school. The work was different from anything I had ever done before but sounded interesting. After two interviews and much prayer I was hired, and we moved to Massachusetts. A lovely apartment and the use of a beautiful beach came with the position. Former employees had not stayed too long, and I was told I wouldn't last six months. I stayed five and a half years and was able to meet many challenges, both in the work and with the personnel. I left there only to take something better and more satisfying.

Send a comment to the editors
NEXT IN THIS ISSUE
Testimony of Healing
Throughout the years I have found that the more I recognize my... 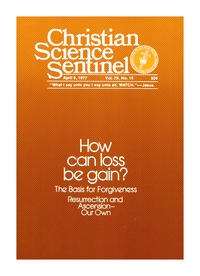