When a mother turns to God in prayer for guidance and proper judgment, her role as a comforter and an educator becomes progressively supportive. She finds it liberating to place her child's welfare above fears, personal attachments, and personal plans. Her reliance on divine Spirit also frees her child from the effects of fear and opens the way for Christly affection to influence and bless them both.

This mother is not the one about whom Mrs. Eddy writes: "If a child is exposed to contagion or infection, the mother is frightened and says, 'My child will be sick.' The law of mortal mind and her own fears govern her child more than the child's mind governs itself, and they produce the very results which might have been prevented through the opposite understanding. Then it is believed that exposure to the contagion wrought the mischief." Science and Health, p. 154;

Send a comment to the editors
NEXT IN THIS ISSUE
Article
Sunday School, Monday School 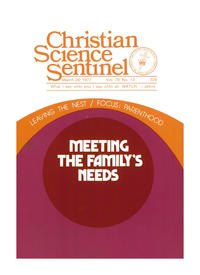