During the past ten years I have had many demonstrations of the...

During the past ten years I have had many demonstrations of the healing power of Christian Science. There have been instances of protection in my family resulting from my daily prayer acknowledging God's care and protection. Several years ago, at a time when there was racial unrest in our town, my husband was returning home from work through the tense area at about ten o'clock at night. He slowed down to stop for a stop sign. Before he got to the corner, there was a blast from a shotgun. The glass in the rear door on the right side of the car was shattered, but he wasn't injured. We were indeed very grateful!

About five or six years ago I decided I wanted to join the local branch Church of Christ, Scientist. However, I smoked, and although previous to this time I had tried to stop, I didn't seem to be able to do so. I felt in continuing this habit I was breaking several of the Commandments, including the first (Ex. 20:3), "Thou shalt have no other gods before me." I didn't want to break the Commandments, but I didn't seem to be able to let go of the habit. I was like Naaman; I had outlined how the healing would take place (see II Kings, Chap. 5). I thought that the healing would be instantaneous, but it wasn't.

Send a comment to the editors
NEXT IN THIS ISSUE
Testimony of Healing
Years ago one of my sisters was the only member of our family... 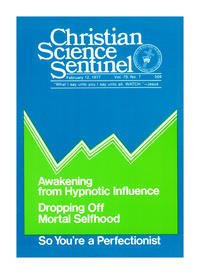