Did you ever feel very small and believe that other people felt the same way about you? Well, over three thousand years ago there were some people feeling just like that who described it as being "grasshoppers" in their own sight. But Caleb didn't feel that way. He lived at the time when Moses was leading the children of Israel to Canaan, the Promised Land. Moses sent him with eleven other men to spy out Canaan to see if it could be occupied.

When the spies returned, they told Moses that Canaan was a land flowing with milk and honey, and there were figs, pomegranates, and grapes there. They brought back some to show Moses and the people. But they said, "The cities are walled, and very great." And they described the men who lived there as being very tall and strong—like giants. And to top if off they told Moses, "We were in our own sight as grasshoppers, and so we were in their sight." Num. 13:28, 33; They evidently needed to know they were children of God. Everybody is a child of God. Nobody is a grasshopper! 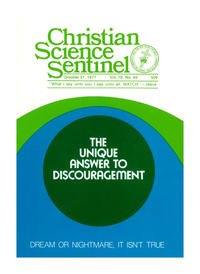