Christian Science has met my every need for a number of years,...

Christian Science has met my every need for a number of years, and I am most grateful.

Some years ago I was plagued with an ailment that was finally simply called "seizures" by the second physician to diagnose it. I really wished to rely on Christian Science for healing and was never afraid, although as I would be about my daily work, without any warning I would fall unconscious and remain so for about half an hour. When I again regained consciousness, I was perfectly well, the same as I was before the attack. It was very frightening for those who had to care for me at these times. Because I wished to assuage their fears, I took medication prescribed by a physician.

Send a comment to the editors
NEXT IN THIS ISSUE
Testimony of Healing
Because it was required of all students at that time, I studied... 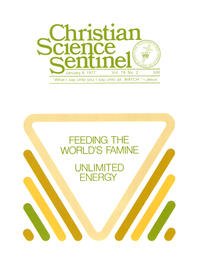